2018 - What a difference!  The bells are now back in place and sounding great.

It is hoped to assemble a team of ringers so if you think you would like to learn, or if you have some experience, please contact Reverend Barbara on 01935 850745 or Churchwarden, Bill Watkins on 01935 850859 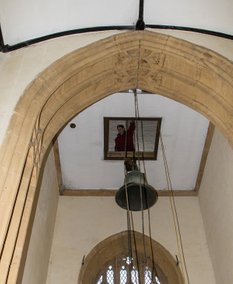 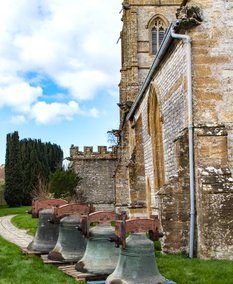 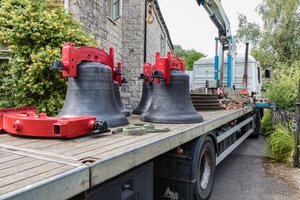 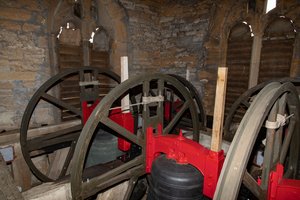 Following the completion of the restoration and conservation of St. Mary's Tower, we turned our attention to the bells...

Mudford has five bells, the oldest being the third - cast in 1592.

The lightest, the first at the top of the scale, or treble as it is known, was cast by the Perdue Foundry at Closworth in 1664. (Closworth is a very small village just outside Yeovil).

The second was cast by William Wiseman of the Montacute Foundry in 1623.

The fourth, previously a 1662 bell, is now a Warner of Spitalfields London, bell as it was re-cast by them in 1914.

There was extensive restoration to the bells and bell frame in 1774 and again in 1914 when warners rehung the bells with new cast iron headstocks in a massive oak frame.

Since then, only limited maintenance has been carried out on the bells and fittings as required, with the result that over the intermediate 100 years the bells are now in need of serious attention.

The bearings, of the simple type of a steel spigot running in a brass shell, have become so worn that any lubricant runs out of them and the bell becomes very hard to ring, whilst the lack of lubrication accelerates the wear even more.

With the bells in this condition it is almost impossible to teach anyone to ring them and even experienced ringers, when asked to ring them for a special occasion, will raise and eyebrow in reply!

If the bells are rehung on modern "sealed for life roller bearings" they will need no maintenance as such for many years. In addition, they would be a pleasure to ring and would be user-friendly, allowing the teaching of a younger generation of ringers to call the parish to church.